Seto is a serious kid who leads a quiet High-school life, until he starts to get teased by resident Gal Anjo.

Yancha Gal no Anjō-san (Japanese: やんちゃギャルの安城さん, Hepburn: Yancha Gyaru no Anjō-san, transl.: “Naughty Gyaru Anjō-san”) is a Japanese manga series written and illustrated by Yūichi Katō. It has been serialized since August 2017 in Shōnen Gahōsha’s Young King magazine, and its chapters have been collected into nine tankōbon volumes.

In a high school in Kasugai, Seto is a serious student who lives a quiet and ordinary life. But when his mischievous classmate, Anna Anjō, begins teasing and hanging out with him on a regular basis, it starts an interesting relationship between them. The story follows the lives and antics of the two polar opposites, both in appearance and personality, as they develop into a romantic couple through their many playful—and sometimes erotic—interactions.

Anjō is accompanied by her friends, Toyoda and Chita, while Seto is accompanied by his friends, Inuyama and Tokio. As they all grow friendly with one another, each person becomes romantically linked to their respective partner within the group as the story progresses.

Most of the names of the characters are based on cities located in Aichi Prefecture.[2]

Seto (瀬戸)
Voiced by: Makoto Asakawa (voice comic)[3]
Seto is a bespectacled high school student in his second year, who is the president of his class. He is a plain and ordinary-looking boy who initially has no interest in girls and only cares about his grades. He struggles trying to improve the person that he is and is unsure about his future ambitions in life.Ch. 98 In their initial encounters, he sees Anjō as too erotic, he gets very lewd thoughts around her, and does not know anything about her or understand why she teases him.Ch. 1-10 After he defended her from harsh words by a classmate, and as the two started to hang out more, he has developed serious feelings for her.Ch. 113-114
Anna Anjō (安城 アンナ, Anjō An’na)
Voiced by: Chiharu Seto (voice comic)[3]
Anjō is a gyaru who is in the same class as Seto. She is incredibly beautiful, flamboyant, athletic, and popular with a cheery personality and outgoing kindness. When the two first met, she took a liking to Seto because of his helpfulness and hard-working nature, then developed a deep crush for him after one of the boys in their class spoke nasty things about her behind her back that Seto refuted.Ch. 14 Ever since, she teases and flirts with him constantly, sometimes to lewd extents. She hopes to follow in her mother’s footsteps and become a professional beautician, and will sometimes use Seto as styling practice.Ch. 6 Her name is similar to that of a real life Japanese adult film star.[4]
Toyoda (豊田)
Voiced by: Yukako Nihei (voice comic)[5]
Toyoda is one of Anjō’s friends. Nicknamed “Toyo” (トヨ), she is a “cool beauty” who speaks in a Kansai dialect sports long jet-black hair, and is a cool and calm-type girl. She likes cute gacha-style toys,Ch. 27 although she is embarrassed by this as she feels having an affinity for such things does not fit her outward appearance and personality.Ch. 57 Her dream is to become the president of a company that creates fancy mascot characters.Ch. 47
Chita (知多)
Voiced by: Yūri Akeshima (voice comic)[6]
Chita is another friend of Anjō’s. Nicknamed “Chii” (チー, Chī), she is a mostly quiet girl with very short hair, thick eyebrows, and a petite figure. She is a foodie with a big appetite who can be seen eating large amounts of food. She dreams of traveling overseas after graduation.Ch. 122 Early on in the story, she appears jealous of Seto spending most of his time hanging out with Anjō, despite knowing nothing about her, as she hopes the least Seto can do is keep Anjō happy, or else she will not forgive him.Ch. 51
Inuyama (犬山)
Inuyama is Seto’s best friend since junior high.Ch. 98 He is an otaku who is exceptionally good at drawing and designing cosplay costumes. At first, he takes interest in Toyoda simply because she has a large chest,Ch. 7 but after learning that they share an interest in cute toys when the two met at a gacha machine, and as they both worked together in a mascot character contest,Ch. 57-59, 63 he starts developing deeper feelings for her. Later in the story, he has the desire to ask Toyoda out, but is scared from possible rejection and the sadness that would follow.Ch. 90

The God of “Game of God”

Ryuu Kusari No Ori -Kokoro No Uchi No “kokoro”-

April 21, 2022
Tokio (トキオ)
Tokio is Toyoda’s brother.Ch. 71 He attends Anjō and Seto’s high school and is very popular with the girls there because of his attractiveness. He becomes a big eater, like Chita, by going out with her on several food runs throughout the story.Ch. 75, 120-121 The two have known each other since childhood and appear to have feeling for one another.Ch. 120-122 He is good friends with Seto and Inuyama, as they all help each other with their school studies.Ch. 98
Ms. Komaki (小牧先生, Komaki-sensei)
Komaki is the nurse at the high school. She is a free-spirited young woman with an eccentric personality who deeply cares about the students she looks after. Seto and her have a bond through the two exchanging similar tastes in manga.Ch. 4, 62 In the main series, as well as her spinoff series, she can be seen with her best friend and colleague, Tobishima (飛島), who is an art teacher.

Manga can be found here. 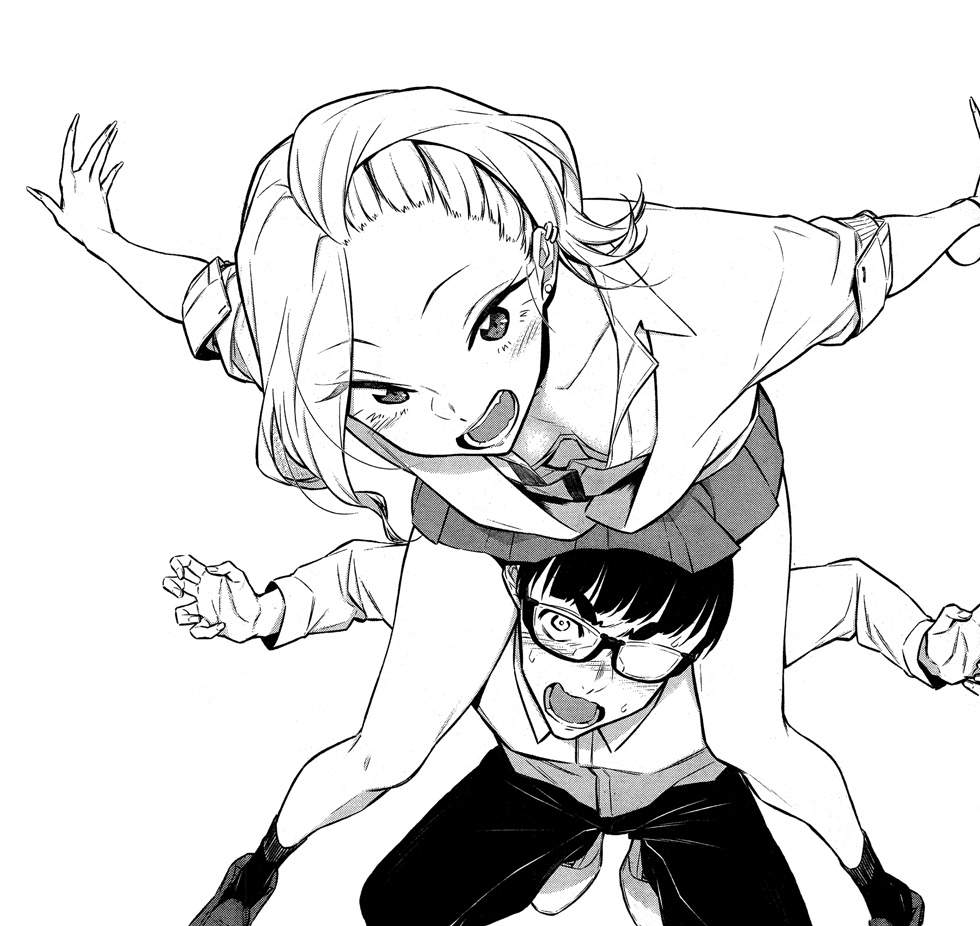 Seto is a completely ordinary and somewhat boring high school student; but for whatever reason, his delinquent classmate Anjou just won’t leave him alone! The serious Seto and energetic Anjou make an unexpected duo, but Anjou doesn’t seem to mind the contrast, as she has too much fun bullying Seto.

Seto, on the other hand, is unable to deal with Anjou’s shenanigans; he doesn’t seem to realise that his humorous reactions are precisely the reason Anjou enjoys his company. But how much of her flirting is really just an act?

Yancha Gal no Anjou-san follows the entertaining daily antics of these two polar opposites, as playful teasing evolves into a treasured relationship. 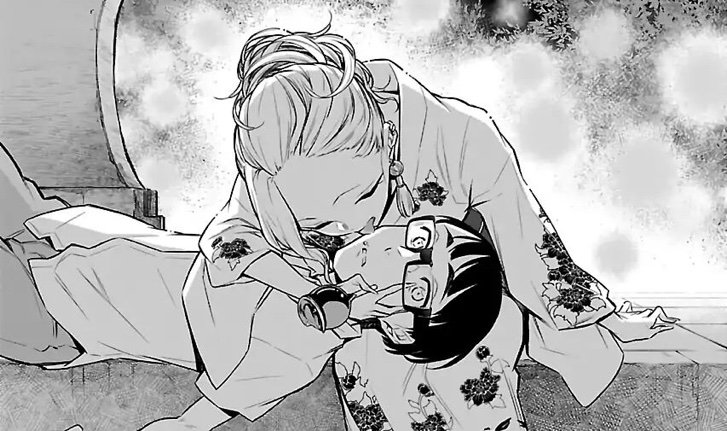 Out of all the teasing manga I have read (Takagi-san, Nagatoro, Uzaki-chan), Yancha Gal no Anjou-san has to be my favorite. Why? Because the story is actually going somewhere. In a lot of these manga, I noticed that the story simply revolves around the two main casts and their relationship together while hinting at its readers that they might get together. But in the end, they don’t. With Anjou-san, even though it doesn’t have the romance tag on MAL, I get the feeling that Anjou and Seto will become more than just friends in the future. In the latest chapter, Seto asked Anjou out on a date and they hugged at the end of the day. Even though their relationship is already abnormally close and couple-like, they never really hugged. So I’m looking forward to them dating one day ‘cause that’s what I signed up for.

The Duchess with an Empty Soul 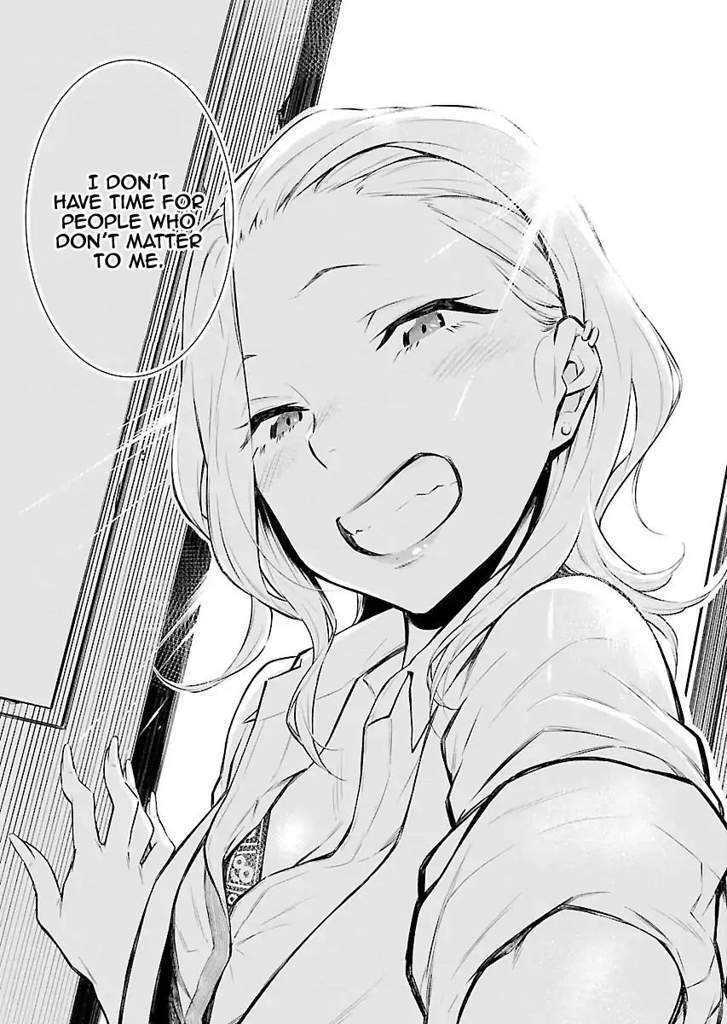 What I find most enjoyable about the manga is Anjou herself. I know she looks like a thot on the outside and is probably not a lot of people’s cup of tea, she is likable. Her character isn’t unique whatsoever because Nagatoro exists, but I prefer her character way more than Nagatoro. Anjou teases Seto and hangs out with him in hopes of breaking him out of his comfort zone. Seto is always seen studying, but by meeting Anjou, that gave him the opportunity to experience a lot of things and do a lot of things he would never do.

The kind of manga where it revolves around the two main casts, it’s really hard for the characters to develop. In Yancha Gal no Anjou-san’s case, surprisingly, the characters developed. Mainly Seto. At the start, Seto is a chicken like any other male lead, but in later chapters, he’s able to ask to hang out with Anjou, go one dates and so much more. With Anjou, she didn’t grow as much as Seto, but she did too. Anjou hangs out with Seto because it’s amusing. From the beginning, she stays around him without knowing that she’s bothering him with his studies. After a while, she started becoming aware of that he’s interfering with Seto on his studies because he knows that he’s going to college while she’s not, therefore she apologized. Love her.

His Highness, don’t leave! I will lose weight for you!